It's amazing how rumors get started and how they seem to take on a life of their own, so in an effort to cut some of these rumors off..... here is the rest of the story...

#1 I have not taken up residence on another grid under a different name with a brand new avie.
#2 I did not leave OSgrid because I was unhappy with my hosting provider or OSgrid.
#3 I have not left OSgrid.  I still have my store on Wright Plaza and actually intend to build again on OSgrid.
#4 I am not dead.... at least... not that I know of.
#5 I'm just taking a break.

What happened is I was having technical problems of my own making and despite the heroic efforts of my hosting company, we were not able to resolve them easily and because of issues in RL, I did not have the time to spend working on it. So, rather than leave something half done, I elected to have my regions removed until I get the time to either rebuild or fix the problems.

Anyway..... I hope to be back on OSgrid in a few months.
In the mean time; you can still reach me via email if you want.

I had planned on relocating Ptarmigan Park or at least part of it to another Grid, but that has not worked out so right now the only online presence I have will be my store on Wright Plaza.  For myself, I will not be on line much for the foreseeable future. You can always reach me via email. :)
Posted by Unknown at 1:37 PM 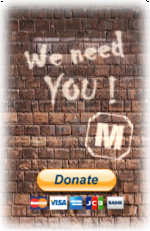